on July 20, 2009
Last week my wife decided to hit me with 2 bombshells. First, she tells me that her mom is dropping off their dogs, or perhaps more apporpriatley named, the dog-in-laws, and they will be joining our already K9 infested home. This highly appreciated little agreement brings the grand total of of dogs in this house to 8, yes 8 dogs... which I will gladly break down for you now: 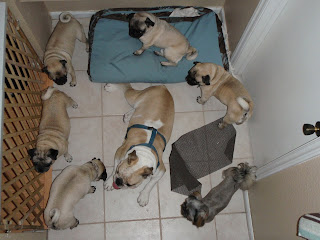 5- Pugs 1- Lab 1- English Bulldog 1- Shih Tzu (Lab not pictured, obviously) So far things are not going well. The Shih Tzu barks... all the damn time, which sucks, but it is an improvement from it's last visit which included rolling in shit and rubbing it all over the house and furniture (PS the Shih Tzu's name is Snuggles, yet I refuse to snuggle anything that is covered in poop). The bulldog, well I actually like the Bulldog, or at least I used to. He would be great if he quit trying to eat the Pugs. The twins hate him and refuse to play any of his bulldog games, instead they just tag team him until he figures out they are not "playing" and then he goes all Brock Lesnar on their furry little asses. Then there is Doo... our "special" little Pug, who actually had a close call with a bulldog once before, but flat out refuses to believe that he is 1/16 the size of his opponent and subsequently causes the biggest fights, because he "rallies the troops" and then everyone starts fighting anyone is nearby (reminds me of a good hockey fight...just louder). Oh, and I cannot forget the Lab.. also "special", but really he just has issues with jumping in the pool then running back in the house. In case you don't know, we have no carpet... at all, so when I step in a wet dog puddle on the tile... it is hard not to go down. Obviously watching all these dogs is going to suck. Luckily my wife will be there to help... which brings me to bombshell number 2. During the stay of the above mentioned dog-in-laws, the wife will be house sitting for our friends. That's right she will not even be here. 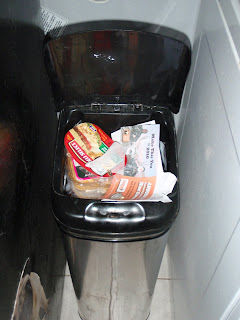 So far things are not good. Monday morning began with shih tzu barking at 4:30 and NEVER ENDING, one of the pugs threw up on the bathroom rug, the bulldog started a fight before they were even fed, and someone pissed on my pillow. As far as the rest of life is concerned, the trash can has been full since Traci left, I have an upset stomach, I am running out of clean clothes, my bed is still not made from the previously mentioned pissing incident, and the two MAJOR successes for today are I still have a job and Rob is not in jail. 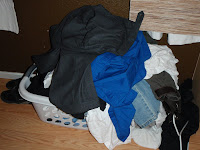 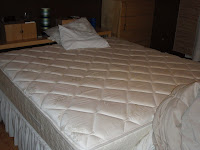 Needless to say, I am taking applications for a substitute wife. I use fill-ins all the time on dates, like to the Improv, dinner, and movies, so why not now? If you are interested in helping me survive until Thursday, please fill out an application (see link below)! Thank you and God bless. Substitute Wife Application View Applicant Responses Here
family pugs wife