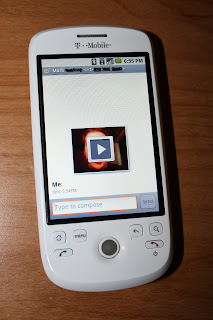 DUDES!!! Let me tell you about why you're about to be seeing my face on your phone a whole lot more. "Video Texting" or "vexting" as I am dubbing it right now, is when instead of typing out an 'LOL' or sending a ";)" you send a video instead! EPIC! Yes, yes, ya'll, now you can send texts without even typing! Save your thumbs for things you're gonna need, like hitch hiking rides to the deli so you can get your fat ass a sandwich!  BOOM! Since so many phones now come with the ability to send and receive MMS (thanks for coming to the party iPhone, better late than never I guess...) why bother typing at all?!?! Now I know that some of you clowns are all like "But hey, I don't want people to see my  face on a video and I'm totally not gonna send one to a friend either!" We'll lady with an annoyingly high voice (in my head people... I know you can't hear anything), to that I say thbbttttt! What about sending a vext with someone or something else's face and your voice? (See video)

Your friends will think "OMG that's like a talking dog! When did you teach your dog to talk?" and you can say "OMG! I taught him Tuesday...and if you forward the message to 100 friends you get a free Nintendo Wii from Microsoft!" Oh and for people who's phones don't support video messaging, well are you really sure you want to be friends with someone still rocking tech from the1990's...I mean COME ON! What, do they fax still too?!?!?!? You know who still sends faxes and and don't have phones with video... terrorists. I'm serious though, vexting is gonna be very popular whether you want it to be or not, so you might as well just embrace it. Now run along a go vext all your peeps right now...oh, and someone send me a vext of someone actually ROTFL... I still don't believe that shit ever happens.