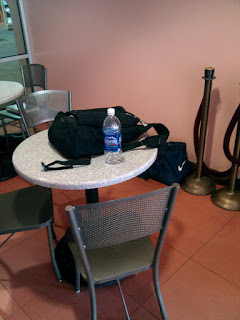 A couple weekends ago I got an opportunity to hang out on the set of the upcoming feature film Suspicion. I spent a total of 18 hours 'on set' as an extra (no you cannot have my autograph). I came across the opportunity via Twitter, shot an email to the address listed, and received word back that I would be there for two days. Yep, I'm that awesome, people just call me up to be in their feature films. Anyone who has been around me in the weeks leading up has undoubtedly heard me talking up my upcoming acting debut and dropping all kinds of movie jargon. I should probably apologize to anyone who has been put off by my non stop attitude, but I refuse to. The first day was nice, 11am to 5:30pm in Hayden Library at ASU. There about 8 of us who would be hanging out studying (Ya, I know! Required some serious acting from me). It was pretty chill I was in three scenes, but spent most of the day sitting around this little table (aka my "trailer"). The last scene I was in that day had  cool view from down the stacks... you've probably seen it before, if you have ever been in a library, but I don't recall ever having seen it... the library that is. 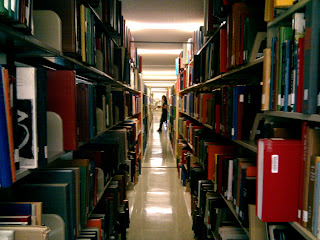 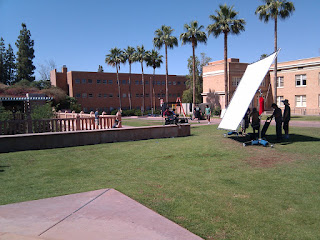 Day two was, for starters at 6 freaking 45 am. Somehow I made it (on time, BOOM), and got settled in. We were divided into 4 groups and set up with "section leaders' who would place us then give us instruction on where to go and when to go there. This time there were over a hundred of us and we would be shooting outside around the library in some wide campus shots, etc. According to some dude on a bike, by 9:30am his mileage tracker was already reading over 2 miles traveled. A few hours later we were doing multiple takes up and down some stairs, up and down the stairs, up and down the stairs, up and down the stairs. It was hot, I was getting sun burnt and I was well on my way to the worlds most epic calf muscles.
We spent our downtime in the MU (once it opened) and there were some... eclectic people there. At one point a group of them even broke out in to random song, show tunes... I think. After beating the crap out of the kids from Glee After lunch ,we alternated from break in the MU and scenes outside until we wrapped at about 5:45pm.
All in all it was an experience that I was clearly a natural for. I explained to Traci that this was merely the first step in one of my always successful master plans, and the entire plan was laid out as follows:


Anyway, look for me in the upcoming movie Suspicion, I'm the guy in the back being awesome. Ya'll can form a line to touch me later. ;)
Pictures Random
Location: Arizona State University, 915 S Rural Rd, Tempe, AZ 85281, USA