I'm Just Not a Fan of Pot Roast 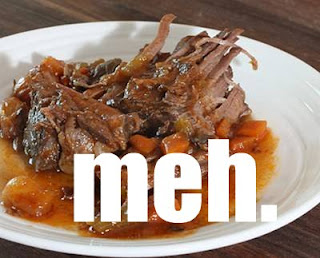 I am just not a fan of pot roast. This dates back as far as I can remember and has no particular cause, I'm just not a fan. Unfortunately my stance on this 'center of plate' item is misinterpreted as defiant to many pro pot roast enthusiasts. These zealots frustratingly fail again and again in their attempts to persuade me otherwise. One such attempt was particularly diabolical, and to this day threatens the very core of trust in my marriage.
Back when I was "actively" attending school in Flagstaff, my future wife prepared a meal for a few of us. Everyone was raving, but my face apparently did not share the same amount of pleasure as the others, so I was questioned about it. "I'm just not a fan of pot roast." I replied. Sounds simple right? Wrong. Turns out my answer was grossly inadequate and required an intensive in depth analysis of the underlying cause. Unfortunately, there weren't any traumatic events causing my 'fence sitting'. and after being grilled for some time, I was only able to convey that 'I think did not pot roast is disgusting or that I don't believe it cannot be tasty, it is just that I am not a fan'. Again, this was insufficient, but the interrogation ended for the time being.
Sometime later... weeks, months, who knows, I was informed by the future 'Mrs. me' that she was making an elk roast for dinner. Sweet, I thought, I like elk, it's a roast but it should be good. Remembering the last time she served me a roast I decided to be a bit more enthused this time around. It wasn't hard because the meal was not disgusting, it had a good flavor, and was overall tasty. I finished my plate and congratulated my personal Betty Crocker on the job well done. That's when it happened. That is when this self satisfying quarter smile slowly began to consume her face. Her eyes filled with pride, chin tilted up, and she said flatly, "That was not elk, it was a regular pot roast", a victorious smile now beaming across her smug face. I just stared at her. Again, I never said I hated pot roast, just not a fan, but now...what had she done. She lied to me. She deceived me. She made a conscience decision to weigh the value of my opinion on pot roast over the value of honesty in our relationship. It was a devastating blow, one from which I have still not recovered. Despite this cataclysmic event in the early stages of our relationship, we have persevered.  Although, there is very little speaking done nowadays on the rare occasion we dine upon a roast for dinner.