Escorted Off Campus / Ingress is Keeping Me Awake

on December 06, 2012
I've really been enjoying +Ingress, the augmented reality game  (ARG) released by Google owned Niantic Labs. I've been so engaged in it that on multiple occasions I've gotten out of bed, put on some clothes, and left the house in the middle of the night to go defend or hack nearby portals. Last night was one of these instances. 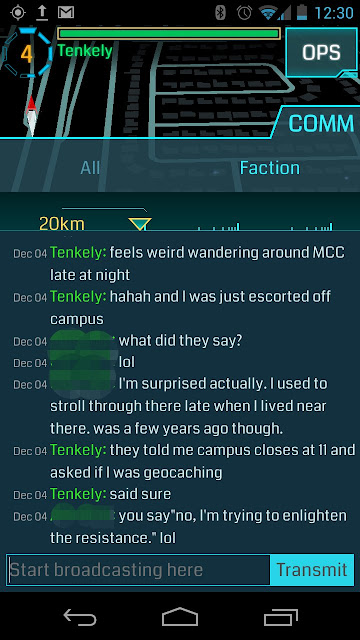 It was about 11:30pm and I had left bed again to go down to MCC and link up some newly upgraded portals. I had already made a few stops along the way and was planning on turning back in after I wrapped up work at the school. I hit a couple portals  near the Rose Garden and had just started to make my way into central campus. It was a bit eerie out and I posted to the faction chat how 'weird' it felt being on that campus that late at night. No sooner had I hit enter on the chat when someone shouted "HEY!" I turned around to see two security guards approaching me. from a distance they keep shouting at me, asking if I worked there. I replied "no" multiple times before they finally reached me. The younger guard asked what I was doing and I explained I was playing a game . "Geo-caching?" he asked. "Sure", I replied (can't be too sure who may be resistance out there, hah). He let me know they saw me out in the Rose Garden and wanted to know if I left anything out there. I explained the what I was looking for was only found on my scanner. He explained that a couple years ago some geo-caching group came out and tore up the whole garden looking for a cache. Crazy. They continued to escort me to my car and explained I was welcome back but it needed to be prior to 11, when the campus closes. Most interestingly of all was the second security guard... who remained silent the entire time, just staring at me. Weird indeed.

Anyway this game is a blast.. if you have an Android phone and can score an illusive invite, I highly suggest you check it out. Below is the trailer video. You can get more information at ingress.com and nianticproject.com. Check it out.